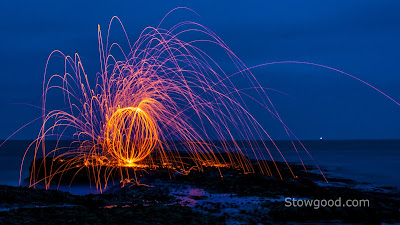 
One other thing to note is the walkie talkies were so helpful as with the waterfall the sea makes a lot of noise. Today we were out for about 3 hours but the water was not cold and we didn't have to walk to far to get to our spot unlike with the waterfall last time, so although I was really tired at about 1am when we finished it was no where near a tiring. It did take a long time to get home and after a end of holiday Mc Donald's and putting my photos on dropbox it was about 4am when I finally got to sleep. I now have to break my sleep cycle and go to work tomorrow, it will be nice to see everyone.
No comments:

I was recently inspired by some photos I saw online here of someone doing long exposure light painting (my favorite style currently) using a waterfall and floating glow sticks down it. I thought I'd have a go myself and arranged a camping trip to a land filled with waterfalls (Ingleton) in the hope we would find somewhere suitable. We went on the waterfall walk during the day with some friends and decided when it was getting dark we would drive as close as we could and walk for an hour to get back to the best waterfall we had seen that day and try the shot.

On the way we stopped off at a small village with some cute stepping stones, which was fun.

Then we did the waterfall walk for the afternoon, it was a bit too busy to take photos so even though I took everything tripod and all I didn't bother. Doug's housemate did take a cool shot of us under the waterfall (we swam to it)

In the evening we went back and took some long exposures in what must have been close to the golden hour. I got one really nice shot which I'm very please with.
Then it got dark, that's when things got difficult. It was really, really difficult to get enough light and it was too loud to hear each other, I had to go in the water to get the glow sticks and it was cold and slippery and Doug had to keep running up and down a big hill. So for next time I got some walkie talkies which are already proving useful and some LED wands to use instead of glow sticks. So I'm not very impressed with the results as they are too blurry and noisy but I'm posting them so in future you can see how much I improved my shots. 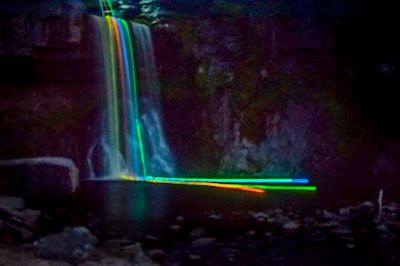 It was a really good learning experience and it was fun trying to work out how to do the shot. When Doug was up at the top he shone a laser on the rock face above the water fall to do a count down so we released our shutters on time. It was a bit of a mission but I will get a better version of this shot in the future.