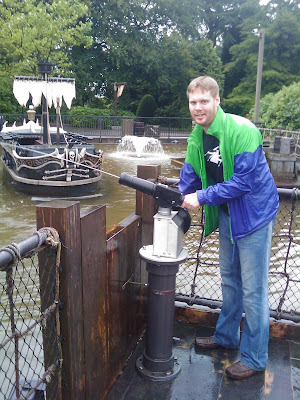 I recently went to alton towers with Dave, Pretti, Matt (who paid for me to go as a birthday present - Thanks Matt and James who was hilarious all day worried about all the rides. He curled up into a ball on nemesis and screwed his eyes up he really hated it and I was like oh no he's having a pants time but it was all ok once we convinced him the rides were fun not to stress people out.
It was rainy which sucked but we did go on every big ride twice! So it was ace! Most more than twice.The only downer was my neck and shoulders hurt for ages due to going on rita 5 times in a row and being literally squashed by my friend Matt's immense mass overflowing into my space/seat half the time he's not really fat but he works out lots and thus has massive shoulders I thought my harness wasn't going to come down on ripsaw I was genuinely scared.
So it was a great time the highlight was the pirate area with the cannons! You could literally soak everyone on the ride using them so check that out if your going soon. I would like to end by showing my respect for a coaster I was so saddened to learn had been demolished... 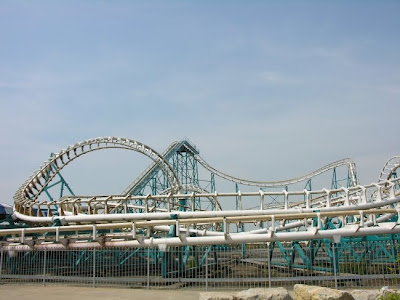 excellent points and the details are more specific than somewhere else, thanks.

I have the same opinion with most of your points, however a few need to be discussed further, I will hold a small conversation with my buddies and maybe I will look for you some suggestion soon.

Hey, I can't view your site properly within Opera, I actually hope you look into fixing this.

I'd love to hear what you think Henry.

As for Opera I don't know why my site does not load properly I just use a good template. I love Chrome have your tried that browser? I plan on changing themes soon, perhaps that will fix it.