Now I have actually used both of these apps properly, well at least a little. I present:

Right both apps tracked well, both disappointing seemed to lack a lap mode which I'm sure I may one day (as in when I'm fit again) find a use for.

When I got home Endomondo ad put three tweets up which was good. One to show you could watch my activity live and two showing my walk to school and my walk back (I broke it into two parts as there was no lap mode I could find). Run Keeper had posted nothing, this was fixed half fixed (only one activity got tweeted instead of two) when I went back into the app and pressed resend it did loose my comments on how it had gone which sucked, as I was beginning to think I wish Endomondo had that feature.
All I did was walk to work using two different route and back so it did not give much time for my phone to regain signal but RK did not auto retry to upload my activity so I was a little disappointed by that, I wonder what Endomondo does when it has not signal to upload things with.
When I was looking at the stats on my laptop I have to say I'm gutted that Run Keeper's interface is much clearer than Endomondo's see for yourself:
RK: 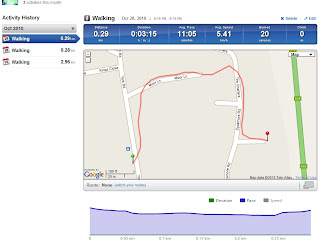 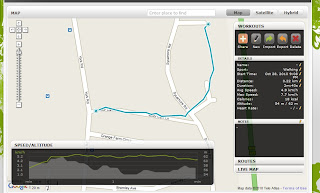 RK just has everything nice and big and easy to read, where as Endomondo you have to really look closely to see the details they don't jump out at you like they should. RK always starts to load the map in America and then moves to when your exercise took pace which annoyed me and Endo the map was always behind the Speed/ Altitude section which also annoyed me.
So in conclusion for now I have made no permanent decision as both apps still have things to improve, but Endomondo seems to focus much more on Android which I like and RK seems to be a iPhone app mainly their pro android app still does not support Heart Rate monitors. I will be using Endomondo for now as their android setup seems so much better, the app is free and does live tracking, HR monitoring, audio cues for free and coolest of all prep talks from people who can watch you live into your ear all for free which RK just does not match even in their paid app - if you subscribe to their elite service the functionality gets closer but it's a shadow of it's own iPhone app which is a real shame. I am keeing RK in mind however because of the great web interface and the fact that it works with the Withings WiFi scale to track your body weight and fat %age which is another gadget I have my eyes on once I have some cash or if they would like to give me one to review for free.
I before the scales I also want a heart rate monitor and if Polar want to give me a Polar WearLink+ transmitter with Bluetooth for free to review I'd be glad to. Or if Zephry want to give me a HxM Bluetooth Heart monitor I'd love to review that also - the holy grail would be to get a Zephyr BioHarness that measures Heart rate, Posture, Your Breathing and your skin temperature which is super but they cost $700 or something I can't afford.
No comments: Link to this post

SportsTracker Pro also looked pretty good but does not seem to allow you to have friends and groups etc so that's going to be left out for now.

I think I'm going to end up using RunKeeper for now as my friend has it on her iPhone and it seems to be more plugged into social networking. When I can afford a HRM (heart rate monitor) I will look again - at maybe purchasing an app, atm I've decided to stick with the free versions because my needs are simple currently and it looks as though much is set to change in between now and me getting a HRM if I stick to running.
This might change after tomorrow when I try out endomondo as it has audio cues which may be really nice I'm not sure. Anyway I have work to do before all this so I'd better get to bed.
No comments: Link to this post

I am short on money at the moment and my problem is fitness not strength so I've decided to try running instead of joining a gym. Anyone who know's me knows that I love gadgets and I've got a pretty good phone I've decided I want to being some geeky gadgetness along with me on my runs something that can give me data on how I'm doing so I can see how to improve.

So my phone is a HTC Desire that means it runs Android and I will be focusing on what's in the android market, I do care what other people can get on the iphone too though as I might want to share/ compare stats with.
The three apps I've seen so far are
Runkeeper, which I've had installed since I got the phone but never actually used and two other apps I heard about in the comments of runkeeper on the market.
Endomondo and Cardio Trainer.
For me the price, functionality and social networking links are all pretty important.
Price: Winner Emdomondo - free with support for heart rate monitor. Runkeeper and Cardio Trainer both have free versions but you have to pay to unlock some features.
Features: Tie, but Runkeeper has promise to gain more new features. Cardio Trainer has some nice add ons for the notification bar that some may like - it keeps a total of you burnt calories over the week - but I don't want that visible at all times. Endomondo has support for a bluetooth heart monitor and audio cues without having to pay which is good. Runkeeper has the ability to share your runs live if you subscribe to the elite account which would be nice.
Social network support: Run Keeper, lets you share with FB and Twitter instantly and allows you to have street teams which is a group that lets you share stats easily which I like.
Tomorrow I will actually test Endomondo and Run Keeper at the moment I'm leaning towards Run Keeper because their website seems great.
No comments: Link to this post